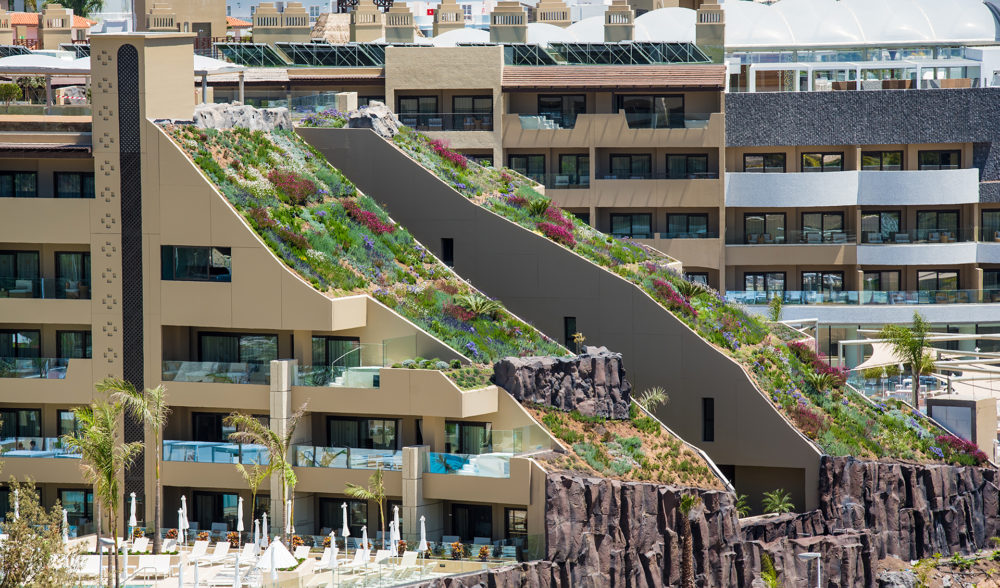 A ‘roof garden’ unique in the Canary Islands

The roof garden of GF Victoria is a unique infrastructure in the Canary Islands and an example of sustainability and architecture for the archipelago. This ‘carpet of vegetation’, of more than 1000m2, consists of vegetation adapted to an environment with much sun and little water.

It is currently the most inclined roof garden in Europe. Its thermal insulation can generate a saving of some 20% in heating installations and 70% in those of air conditioning.

“We wanted the project to be different, to be responsible with the environment,” says Francisco Calzadilla, technical director of Grupo Fedola and advisor to the Board. In addition, “it has impacted on the energy efficiency of the building, since it is capable of regulating it thermally and so helps to reduce spending on the energy needed to cool the building”.

This infrastructure is the result of an engineering project worthy of the award for the Best Work Sika 2017. Waterproofing Machado SL, is the company that carried out the waterproofing and assembly of these three decks. “What makes this cover unique is the extreme complexity of its design, since there are very steep slopes, in addition to the type of vegetation used on a roof with such a steep slope”, underlines Gerardo Machado, representative of Machado Waterproofing. “There are very few decks of this type in the world,” he adds.

GF Victoria is an example of a tourist building with high energy efficiency. The five-star Grand Luxury hotel of GF Hoteles, a chain belonging to the Fedola Group, was named by ‘Re Think Hotel 2018’ as one of the ten best sustainability and hotel rehabilitation projects nationwide.