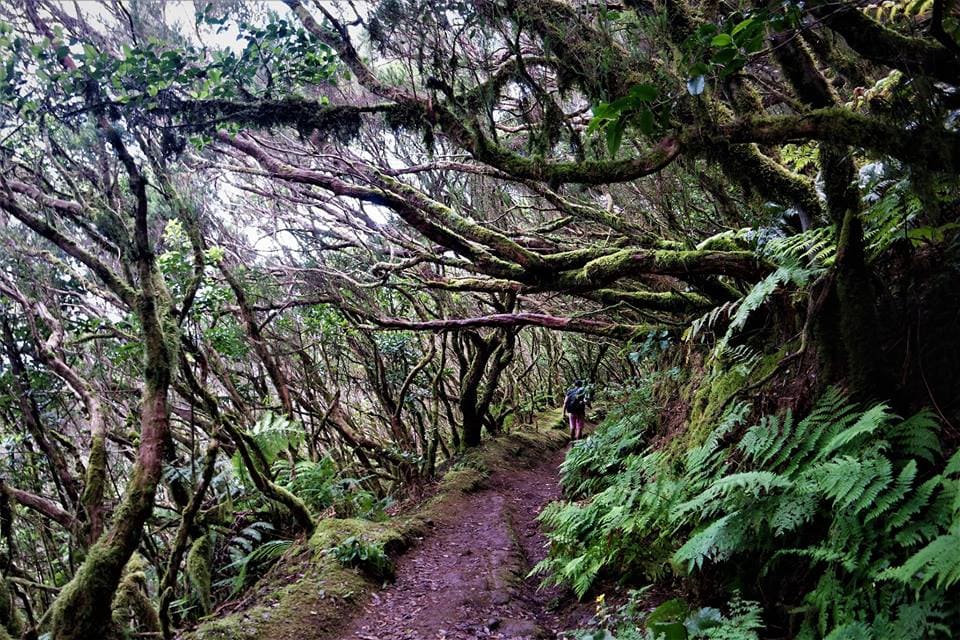 Known as the Enchanted Forest, it is one of the most interesting and impressive trails of all those on the island of Tenerife. It houses a small, but leafy example of a laurel forest, a representative plant of the islands that forms part of the area known as Macaronesia, among which is the Canary archipelago.

Tenerife offers varied landscapes which will not stop surprising you. Each corner of the island is different from one you will have seen. In this case, the route through the Enchanted Forest will make you fall in love with Tenerife and this natural jewel called Anaga Rural Park. It is one more piece of the entertaining puzzle that makes up the island and that more people dare to discover on their own.

At GF Victoria, we would like to give you the necessary advice so that you can enjoy this route and immerse yourself in the wonderful nature of the island.

The Integral Natural Reserve of El Pijaral, where the route is located, occupies just over 300 hectares of the Anaga massif. For conservation reasons, it is necessary to request a special permit to visit it. You can arrange this in a fast and simple way through this page.

The Enchanted Forest trail runs along a circular route of 6.7 kilometres. It is a trek with quite low difficulty on an area which is mostly flat. 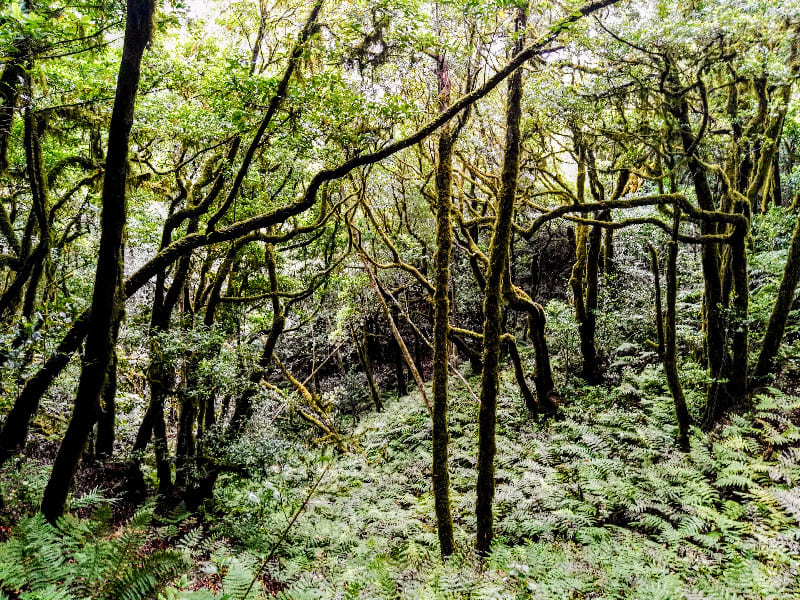 How to get there?

Head in the direction of San Andrés and take the El Bailadero / Taganana turnoff. When you find the new detour to El Bailadero, turn. You will be on the TF-123 road, and the start of the route is between kilometres 4 and 5.

Head in the direction of Monte de las Mercedes  and take the El Bailadero turnoff to join the TF-123. There you will find the beginning of the trail between kilometres 4 and 5.

During the journey, the road is of great scenic beauty and with many curves. So, although it is not many kilometres, it takes time. When you are between kilometres 4 and 5, known as the Ensillada area, you will see a small parking zone and a barrier. 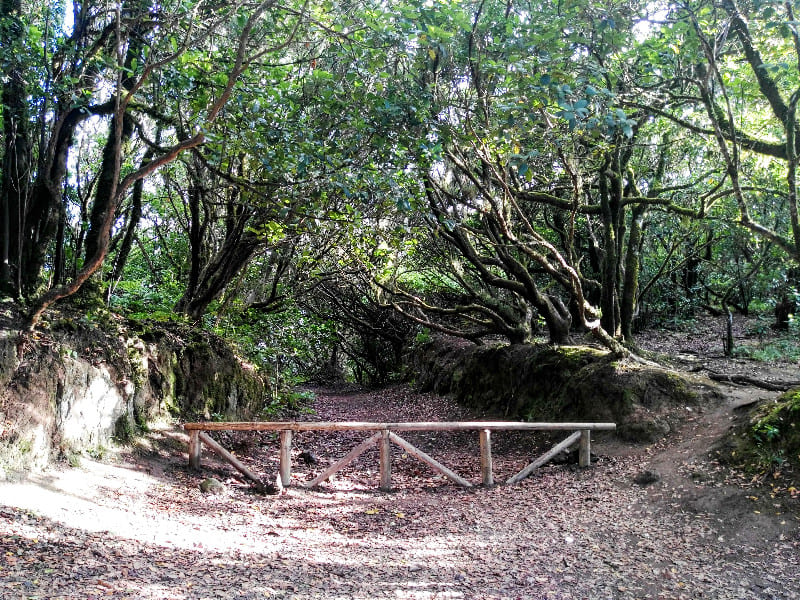 First part of the trail

Once located, you may have a doubt about where the path begins; whether at the barrier or the path that is right next to the sanctioning sign. It starts right there. It is a circular route, so you will reach the same starting point.

The path has no signs, except for a few stone cairns that take time to appear. You must always follow the best path.

Soon a great spectacle of nature will appear. Walking between tunnels formed by moss-covered tree branches is something very mysterious. In some sections it is completely muddy and you will have to juggle to get around the mud.

After an hour of walking you will arrive at Roque Anambro, a mass of stone that you cannot miss. From there, fantastic views are possible. Later, when you reach the Mirador del Tejo, with plenty of space, you can take a break. The viewpoint offers magnificent views of the hamlets of Taganana, Roque de las Bodegas, Almáciga and Benijo.

Second part of the trail

From the viewpoint you will see two paths leading off. The first, among vegetation are tunnels that reach the coast or the hamlet of Chamorga. Or the second option is wider and sandy, and leads to the starting point. 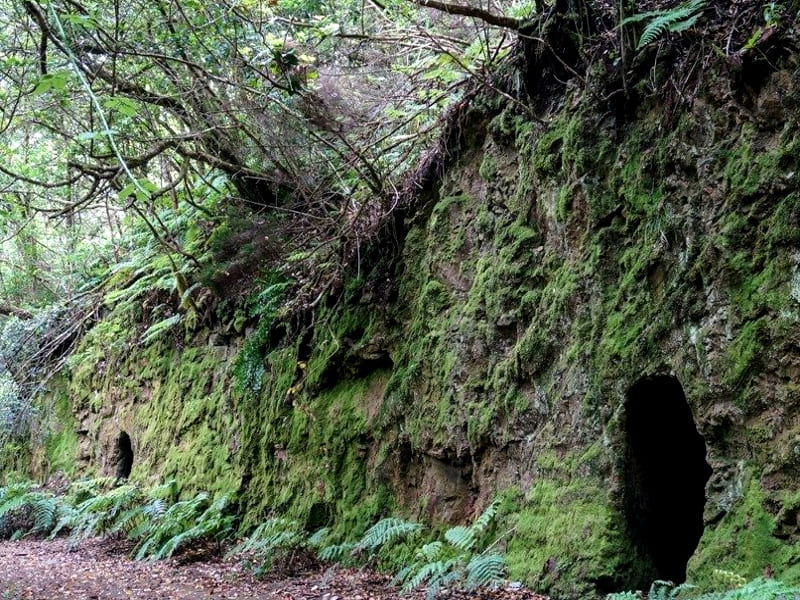 This section becomes a bit more mundane, but it holds some surprises such as several caves carved into the stone. Thus, after about another hour of walking, you will reach the TF-123 road. Once there, you can choose to return to your car by walking along the road; however, the safest option is to take the leafy path to the right, slightly hidden again. After a climb you will find again the fork from the beginning and also the parking zone.This is where the walk ends.

When you return home, you will take back cherished memories of visiting new places like the Enchanted Forest, where you encountered a magical, natural, environment. We know the importance of the moments lived during holidays and we hope to have contributed our grain of sand by bringing you an essential proposal to enjoy to the fullest. And, if you still have doubts, don’t hesitate to contact our GF Victoria team, we will be happy to help you.

Gestionar el Consentimiento de las Cookies
This website uses both its own cookies and technical third-party cookies to
collect statistical information about your Internet browsing and to show you
related advertising according to your tastes, as well as to improve your user experience. By browsing this website, you consent to the use of these cookies. You can change your browser settings to not accept this installation, or obtain more information in our cookie policy.
Manage options Manage services Manage vendors Read more about these purposes
Preferences
{title} {title} {title}